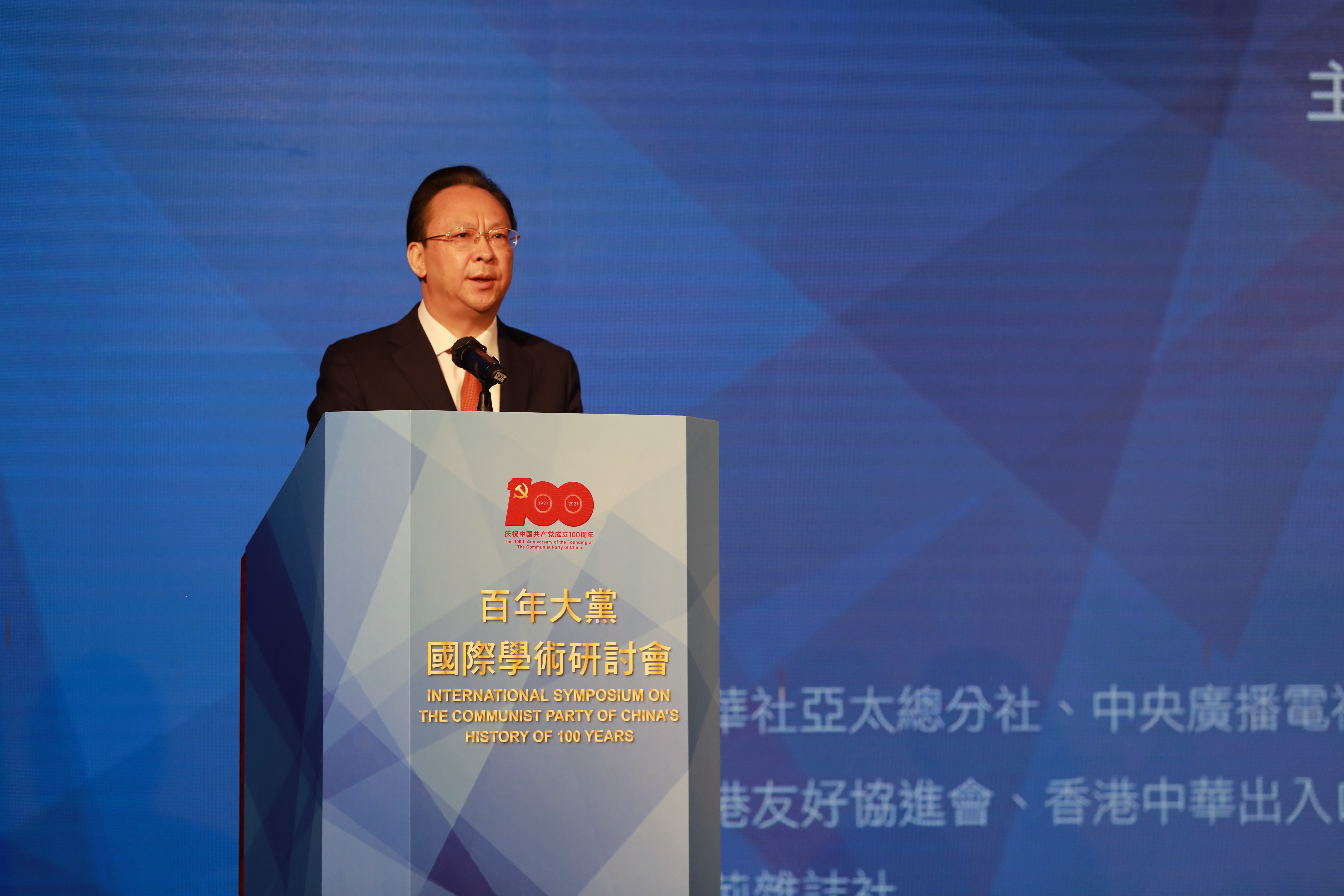 Good morning! In the run-up to the 100th anniversary of the founding of the Communist Party of China (CPC), it gives me great pleasure to join you at today’s International Symposium to explore the CPC’s 100-year journey and the reasons for its success. First of all, on behalf of the Liaison Office of the Central People’s Government in the Hong Kong SAR, I wish to extend warm congratulations on the opening of the symposium, and a warm welcome to you all!

One hundred years ago, the CPC was founded at a time of colossal internal turmoil, external threats and unprecedented social crises. Over the past 100 years, the CPC has succeeded in uniting and leading the Chinese people in an arduous and relentless struggle, resulting in a tremendous transformation of China. China is now the world’s second largest economy. It has seen remarkable technological advancements, a surge of comprehensive national power and rising international influence. Many may wonder: Why has the CPC been able to achieve such great successes? How is it that it enjoys such popular support of the Chinese people? What makes the CPC work in China? The answers, I think, can be found in the centennial history of the CPC.

— The CPC is persistent in pursuing lofty ideals.

General Secretary Xi Jinping has stressed that the original aspiration and mission of the Chinese Communists is to seek happiness for the Chinese people and rejuvenation for the Chinese nation. This is the fundamental driving force that has inspired the Chinese Communists to strive forward. Over the past 100 years, the Chinese nation, under the leadership of the CPC, has made steady progress towards prosperity and strength. Once impoverished and weak, the Chinese nation has emerged from obscurity to take its place under the spotlight on the world stage. Faced with profound changes unseen in a century, and threats to world peace and development posed by unilateralism, protectionism, and hegemonism, the CPC has put forward the vision of building a community of shared future for mankind, promoted international cooperation via the Belt and Road initiative, and endeavored to foster a new type of international relations founded on mutual respect, fairness, justice and win-win cooperation. To contain the raging COVID-19 pandemic, China has taken the lead in pledging to make vaccines a global public good, and has provided assistance to more than 80 countries and international organizations. History bears witness to the fact that by adhering to its lofty ideals and waging relentless struggles, the CPC has successfully led the Chinese people in pulling off the “twin miracles” of rapid economic development and lasting social stability, contributing China’s wisdom and perspective toward resolving the problems facing mankind.

— The CPC is persistent in seeking truth from facts. General Secretary Xi Jinping observed that all our past achievements were based on seeking truth from facts. The centennial history of the CPC is one of leading the people to understand, transform, build and develop China in a down-to-earth manner. During the course of its history, the CPC has been faced with a raft of theoretical and practical questions such as “what is socialism and how to build it”; “what kind of party to build and how to build it”; and “what kind of development to achieve and how to achieve it”. To find answers to these questions, the CPC has always adapted the basic tenets of Marxism to fit China’s realities; rejected ideological and theoretical stasis, and kept moving ahead in sync with times. According to popular wisdom, only the wearer can tell where the shoe pinches. Similarly, the CPC is committed to a development path that suits China’s national conditions, refusing to be confined to the beaten track, or simply to copy models from others. History and practice have proved that a development path works best only when it accords with the ground reality.

— The CPC is persistent in its people-oriented philosophy. General Secretary Xi Jinping has stressed that the people’s aspiration for a better life is our striving goal. The CPC comes from the people, has its roots in the people, and makes it a fundamental purpose to whole-heartedly serve the people. Over the past 100 years, the CPC has led the Chinese people in striving for national independence and rejuvenation, a cause that is being pursued for the people and by the people. Since its reform and opening up, 770 million rural residents in China have been lifted out of poverty. According to the World Bank’s international poverty standard, China has accounted for more than 70 percent of global poverty reduction since then. One who wholeheartedly serves the people is surely to be loved by the people. A poll released last July by Harvard University’s Kennedy School of Government found that Chinese people’s satisfaction with the Central Government reached 93 per cent. Thanks to its people-centred philosophy, the CPC has been able to muster the widest support, achieve the most extraordinary success, and win the hearts and minds of the people.

— The CPC is persistent in carrying out self-reforms. General Secretary Xi Jinping has pointed out that the greatness of the CPC lies not in that it never makes mistakes, but that it never conceals its shortcomings, and has the courage to face up to problems, to carry out self-reforms, and has a strong ability to correct itself. Throughout its centennial history, the CPC has always adhered to its fine tradition of courageous self-reflection, and has kept purifying, perfecting, reforming, and improving itself. Since its 18th National Congress, the CPC Central Committee has stepped up its effort to comprehensively govern the Party with strict discipline. Having the courage and the finesse to carry out self-reform is the fundamental reason why the CPC, as a major party with a 100-year history, has been able to maintain its relevance and purity.

Over the past 100 years, Hong Kong has been closely intertwined with the CPC. In the early years of the people’s republic, the CPC made the decision to “temporarily withhold the recovery of Hong Kong and maintain the status quo”. After the Third Plenary Session of the 11th CPC Central Committee, Deng Xiaoping and his colleagues creatively put forward the great concept of “one country, two systems”. Since its return, Hong Kong has embarked on a journey of unity and common development with the motherland. With HK facing multiple challenges in the past two years brought about by the turbulence over the extradition bill, the COVID-19 pandemic and changes in the external environment, the CPC Central Committee led by General Secretary Xi Jinping has properly sized up the situation and responded calmly by enacting the Law of the People’s Republic of China on Safeguarding National Security in the Hong Kong SAR, improving the SAR’s electoral systems, and maintaining the SAR’s constitutional order. It also supports HK’s participation in the development of the Guangdong-Hong Kong-Macao Greater Bay Area and HK’s integration into the national economy so as to maintain Hong Kong’s long-term prosperity and stability. Hong Kong’s future is bound to be even brighter.

In the past 100 years, the CPC has actively reached out to people and cultures beyond its own shores. Following the fundamental principles of “independence, equality, mutual respect and non-interference in each other’s internal affairs”, the CPC has established links with over 400 political parties and organizations in more than 140 countries and regions, transcending differences in ideology and social systems. It has made its due contributions to maintaining world peace, promoting economic development, and driving human progress.

Recently, a music video titled Youth has become popular on the Internet – “I am still the lad I used to be. My original aspiration has remained unchanged. 100 years is merely a test. The goals for a better life will be achieved one after another.” Bearing its lofty goals in mind, the centennial CPC is in its prime. We firmly believe that as long as we stay true to our original aspiration, keep our mission firmly in mind and forge ahead, the Chinese dream of the great rejuvenation of the Chinese nation will most certainly come true. An open and confident CPC will definitely be able to contribute to a better world in united efforts with nations around the world.

Finally I wish today’s symposium a great success and you find it an enjoyable and rewarding experience.